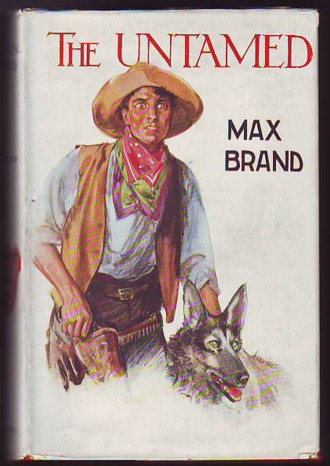 Brand's first novel, originally published as a six-part serial beginning with the December 7th, 1918 issue of 'All-Story Magazine.' Red cloth w/black lettering to front cover/spine, 374 pages + 5 pages of ads for various Putnam's Half-a-Crown fiction editions. This second printing was issued in January, 1925, with the first printing having appeared in October, 1924. Edgewear/scrapes, tiny scrape to left edge of front cover, small abrasion/scrape to bottom of front gutter, numerous abrasions/scrapes to rear gutter, lightly foxed edges, light general wear, in dust jacket w/light chipping to corners/spine ends, small ballpoint pen tip-sized puncture over front gutter, 1/2" tear to top left spine edge, light smudging to rear panel. No previous owner's name or notations, red cloth still bright. An extremely difficult title to turn up in a dust jacket of any kind (this one is now in a protective mylar sleeve). Jacket illustration shows a wide-eyed, colourfully-dressed cowboy about to pull a weapon from his holster while his other hand pats the head of a wolf who stares intently at whatever it is that has captured the cowboy's attention. (A bibliographic note: there is a Ryerson Press sticker affixed to the spine of the dust jacket, so this printing might also be considered a Canadian edition, although whether a first thus or not is uncertain.)