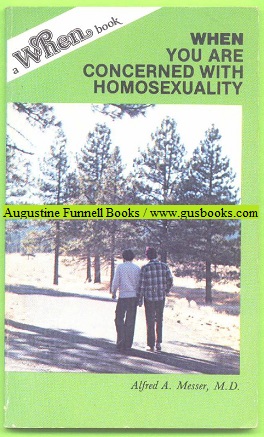 When You Are Concerned With Homosexuality

Paperback original. A title from the publisher's 'When' series, this one offering a doctor's "hope and reassurance for parents." In his Preface the good doctor states, "Homosexuality is not an irreversible condition. It can be treated." He then goes on to analyze "in-depth how properly loving families contribute to the development of heterosexual interests; and how other families, without suitable role models, block sexual development, with resulting sexual deviance." He further tells a variety of stories, one of them concluding with this somewhat unusual line: "Eventually he achieved competence in heterosexuality." (yessir, that's one competent heterosexual!). The author addresses a variety of issues, grouping them into seven chapters: "Myths About Homosexuality," "Sexual Development," "Sexual Deviation," "Homosexuality and the Family," "Early Detection of Homosexuality," "Society and Sexual Deviancy," and "Treatment of Homosexual Behavior." 96 pages. Moderate general wear. Internally tight and clean.

Title: When You Are Concerned With Homosexuality

When You Are Concerned With Homosexuality