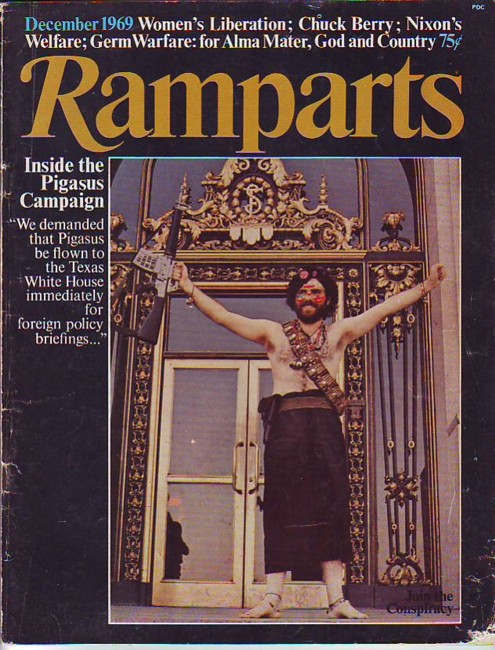 An issue of the counterculture magazine that dealt with all of those things to the left of mainstream American thought and politics. This issue contains articles and columns by Jerry Rubin, Seymour Hersh, Michael Lydon, Marlene Dixon, Linda Hunt & Gary Hunt & Nancy Scheper, and Joan Holden on a variety of subjects, including the women's liberation movement, the Pigasus plot of Rubin and his Yippie cohorts, germ warfare, Chucky Berry, poverty and the rock music cash cow. Also contains a 16-page book supplement. Cover features Jerry Rubin in full Yippie regalia. (One of the more amusing items in the magazine -- not that anyone could ever accuse Ramparts of being amusing -- is a half-page advertisement by Reprise Records promoting Jethro Tull's "Stand Up" album and apologizing for incorrect information in advertising for the band's first album, "This Was." Although one wonders if the apology/correction came because Reprise was just a good, honest corporate citizen -- yes, an oxymoron -- or if it came because Ian Anderson ripped Reprise a new anal orifice after reading the incorrect information. That question will undoubtedly go down in history with the chicken-and-egg puzzle.) 76 pages, illustrated. Rubbing, impressions, chipping to bottom right corner of front cover, 2" by 1" piece torn unevenly from bottom edge of back cover, general wear.