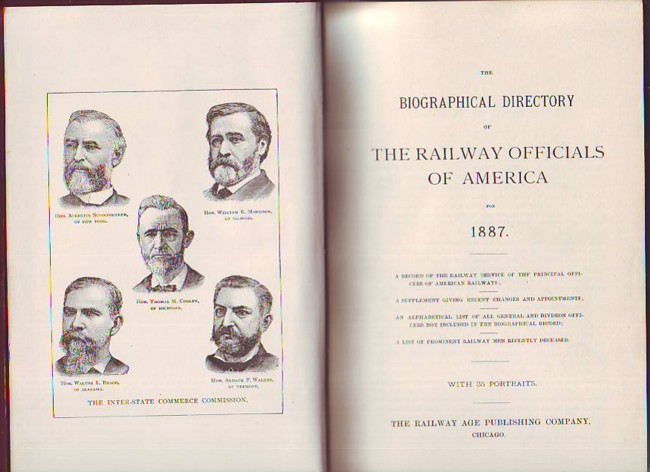 The Biographical Directory of the Railway Officials of America for 1887

From the title page: "A record of the railway service of the principal officers of American railways; a supplement giving recent changes and appointments; an alphabetical list of all general and division officers not included in the biographical record; a list of prominent railway men recently deceased." The listings are thorough, and include officials from some of the most obscure short line and narrow gauge railways in the US. Among the Canadian railways listed are the Manitoba & North-Western Railway Co., the Central Ontario Railroad, the Grank Trunk Railway, the Erie & Huron Railway, the Quebec Central Railway, and numerous others. This copy once owned by one of the men included in the list, one John Stewart, division superintendent, of the New Brunswick Railway office in Woodstock, New Brunswick, and bears his signature on second end paper. Maroon cloth w/title and rule in blind to front cover, blind decoration/rule to back cover, gilt spine lettering, 416 pages + eight pages of advertisements, illustrated w/35 portraits. Moderate wear to corners/spine ends, spine slant, tanned/lightly soiled edges, previous owner's (Stewart's) name/position/city/date on second end paper. An uncommon item, especially in this condition. (C/BT)

Title: The Biographical Directory of the Railway Officials of America for 1887

The Biographical Directory of the Railway Officials of America for 1887