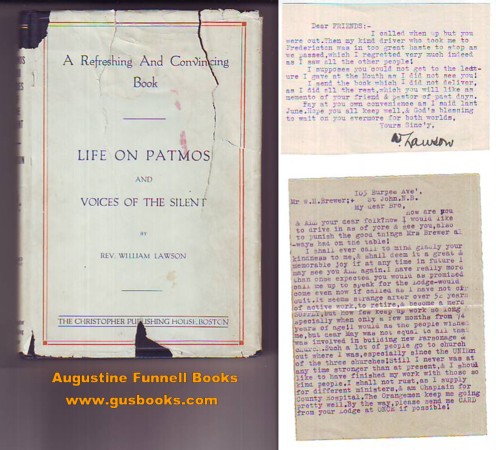 Lawson presents the theme of divine sovereignty in the first part of his book, then offers brief biographical material on John Greenleaf Whittier, Robert Louis Stevenson and Alfred Tennyson, as well as a couple of essays, "The Spots in Two Bright Suns" and "An Arrow of Suggestion." Laid in are two typewritten correspondences from Lawson. The first is a 15-line note concerning a missed visit with friends, and an instruction to pay for the book at the friends' convenience. It is signed, W. Lawson. The second typescript is a longer letter (on both sides) to a W.H. Brewer of Saint John, New Brunswick, recalling earlier times, hoping to receive an invitation to visit, and offering his correspondent best Christmas wishes. One presumes that both letters are to the same individual. Lawson was just a few months shy of his 74th birthday at the time of this second letter. Navy cloth w/gilt lettering to front cover/spine, 138 pages. Bumped corners/spine ends, light tanning, moderate general wear, in tired dust jacket w/edgewear, several long tears, pieces from edges/top spine, general wear. Jacket now in protective mylar sleeve.

Title: LIFE ON PATMOS and Voices of the Silent (signed letter laid in)