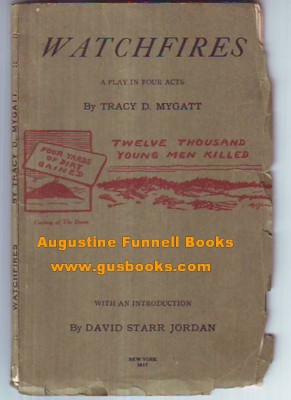 WATCHFIRES, A Play in Four Acts

Mygatt was a lesbian writer, socialist, pacifist and suffragist who opposed the participation of the United States in World War 1, and wrote this anti-war play that takes place between June and December 1916. Introduction by David Starr Jordan. This is the second printing of the original edition, not one of those common-as-dirt and soulless print-on-demand abominations that clutter the Internet like the garbage they are. 50 pages. Slant, chips/tears to edges, previous owner's signature to title page. Uncommon.

WATCHFIRES, A Play in Four Acts