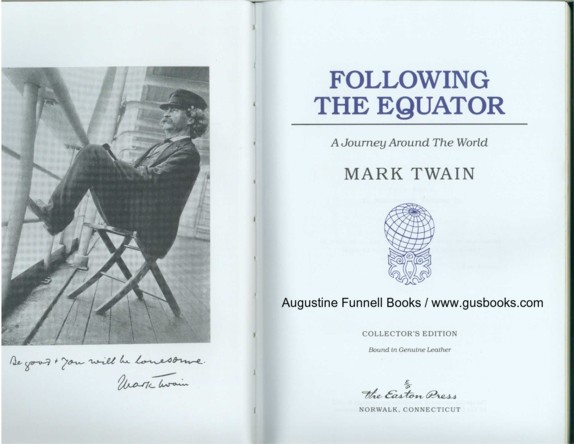 FOLLOWING THE EQUATOR: A Journey Around the World

First published in 1897, after a tour of the British Empire in 1895. Contains narratives critical of the usual Twain targets of racism and imperialism, as well as his keen insights into the inconsistent and puzzling ways of people and their activities. Also includes some fiction masquerading as part of the narrative, but not intended to fool anyone as being real. Blue leather w/gilt decorations to covers, gilt lettering/decorations to spine, raised bands, gilt edges, 712 pages, ribbon bookmark. Scuffed/scratched/flaked gilt to all three edges, otherwise only light general wear. A scarce edition. This weighs more than the average book, so additional postage will probably be required.

Title: FOLLOWING THE EQUATOR: A Journey Around the World

Jacket Condition: No Jacket (as issued)

FOLLOWING THE EQUATOR: A Journey Around the World