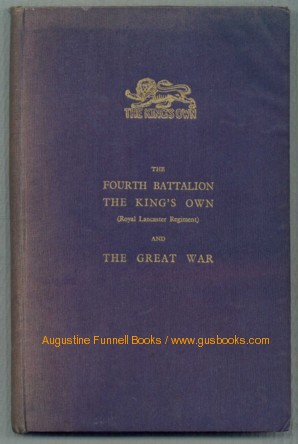 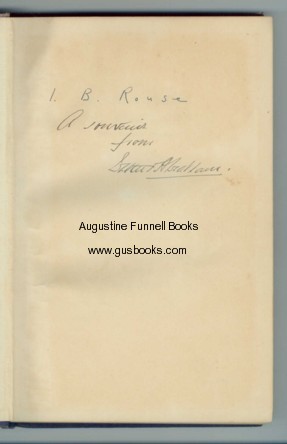 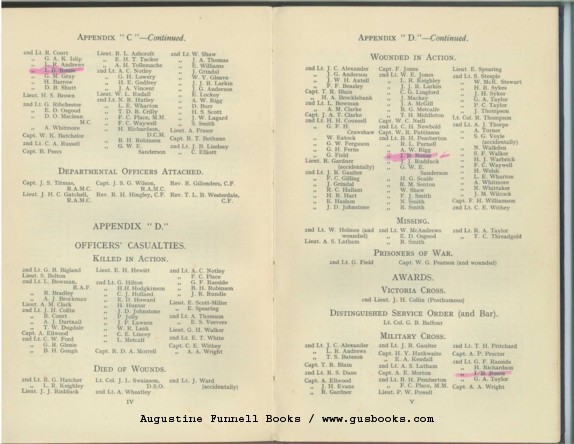 No date, but published in late 1935 or early 1936, since Wadham's contribution (ending at page 19) is dated 13th November, 1935, and Crossley's "Foreword to Part II" is dated December of the same year. Wadham writes, "These notes have been compiled, more or less in the form of a diary, with a view to placing on record the services of those who voluntarily came forward to serve their country in its hour of need." This copy from the library of 2nd Lt. I. (Irvine) B. Rouse of the battalion, who is listed thrice in the appendices, once in a "Additional Nominal Roll of Officers who served with the I/4th Battalion The King's Own Royal Regt. (in order of joining)," once in a list of those wounded in action, and lastly in the list of those who received the Military Cross. Wadham has written his inscription ("A souvenir/from") and signed beneath Rouse's printed name. Uncommon signed. Blue cloth w/battalion's crest/lettering in gilt to front cover, 136 pages + XXIIII (24) pages of appendices/index. Appendices include: (A) nominal roll of officers mobilized with the battalion as of August 4, 1914; (B) the roll of officers who proceeded overseas (May 3, 1915); (C) an additional nominal roll of officers who served with the battalion; (D) officers' casualties/prisoners of war/awards; (E) a list of the rank and file killed in action or who died of their wounds; (F) a list of the rank and file wounded in action; (G) a list of rank and file missing/reported dead, wounded and prisoners, wounded and missing, missing, and prisoners of war; (H) rank and file awards; (I) an extract from the supplement (June 28, 1918) to the London Gazette (June 25, 1918; (J) an extract from the supplement (September 14, 1917) to the London Gazette (September 14, 1917); and (K) an extract from the supplement (June 28, 1918) to the London Gazette (June 25, 1918). Strong spine slant, sunned spine/edges, wear to corners/spine ends, some cover soil, scuffing, light edge soil, Rouse's name highlighted in pink at all three appearances in the appendices.

Title: The FOURTH BATTALION THE KING'S OWN (Royal Lancaster Regiment) and THE GREAT WAR (signed)

Jacket Condition: No Jacket (as issued)