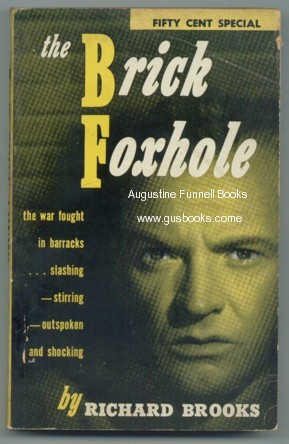 No date (circa 1950). Brooks's first novel, tackling the theme of homosexuality in the army, and its repercussions for one man at the hands of another just out of the service. Published before Brooks became a top Hollywood screenwriter/director, and the basis for Crossfire, a film directed by Edward Dmytryk and that starred Robert Young, Robert Mitchum, and Robert Ryan (you didn't *have* to be named Robert to star in this flick, but apparently it helped a whole helluva lot). 320 pages, cover photograph shows film close-up of Robert Ryan. Edgewear, thin/uneven crease to top right corner of front cover, thin creasing to bottom right corner of same, a bit of wear to spine ends, moderate surface wear, light flaking to reading crease at left side of front cover, splash-stained top edge light tanning. Internally still fairly tight. Fairly common in hardcover, but quite a scarce title in paperback, especially in decent condition.