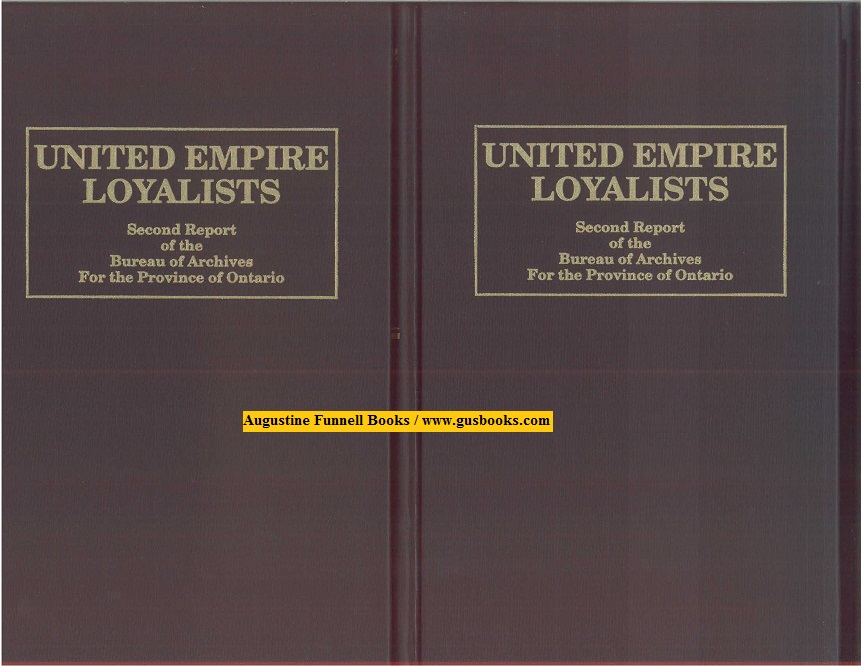 Second Report of the Bureau of Archives For the Province of Ontario 1904, Part I & Part II (United Empire Loyalists)

Facsimile edition of tomes first published in 1905 with the sub-title, "United Empire Loyalists, Enquiry into the Losses and Services in Consequence of Their Loyalty, Evidence in the Canadian Claims." Contains accounts of Loyalist land claims dealt with by the British after that bit of unpleasantness that was the American Revolutionary War. Archivist Fraser also provides a brief history of the circumstances fostering the Loyalist migration to the Great White North (not widely called the Great White North back then, but every damn bit as cold nonetheless), and gives us some information about the process claimants had to go through to see their claims come to fruition. Of note to genealogists as well as historians of the period. Black cloth w/gilt lettering to front covers/spines, 1,436 pages (including notes, index). A nice pair of books. Since these will weigh more than the average title, Canada Post will see fit to charge additional postage to get them from my corner of the playpen to yours. If you would like to know just how much additional postage, send me an e-mail containing your complete mailing address, and I'll cyper out a total for you. (C/WH)

Title: Second Report of the Bureau of Archives For the Province of Ontario 1904, Part I & Part II (United Empire Loyalists)

Jacket Condition: No Jackets, as issued

Second Report of the Bureau of Archives For the Province of Ontario 1904, Part I & Part II (United Empire Loyalists)