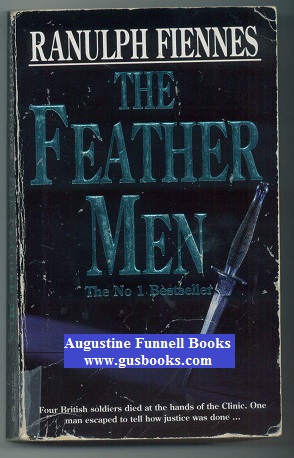 "In the years between 1977 and 1990, a group of hired assassins known as the Clinic tracked down and killed four British soldiers, one at a time. Two of the victims were ex-SAS. All fiour had fought in the Arabian desert./The Feather Men were recruited to hunt the Clinic. Without their intervention more soldiers would have died. At the end of their operation they asked Ranulph Fiennes, one of the world's best-known explorers and himself a former SAS officer, to tell their extraordinary story..." Originally presented by Fiennes as a true story, he later admitted that the book was entirely fiction. This is the uncommon paperback edition containing an index and eight pages of photographs. 397 pages (including a glossary and the aforementioned index). A lot of general wear, edgewear, creasing, previous owner's inch-long tape repair top bottom right spine/bottom left edge of front cover, reading creases to spine, previous owner's name/address/date to inside front cover. Entirely readable, but not at all in collectible condition.