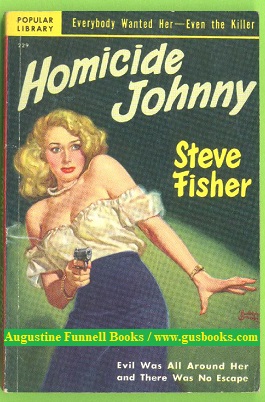 As one murder follows another, "Homicide" Johnny West fears that he and Penny Lane, his babe co-worker, are the killer's next victims. (Some guy named Paul McCartney wrote a song about this particular babe. Oh, sure, he claims that it was in remembrance of a bus terminus between his place and his friend John Lennon's, but hey, I don't believe it for a second. I mean, McCartney was born in 1942, and this paperback was published in 1950, so he was eight years old and probably stealing American paperbacks with lurid covers from the neighbourhood newsagent's.) Originally published in hardcover in 1940 by Arcadia House, under the pseudonym Stephen Gould. 158 pages + 2 pages of advertisements for other titles published by Popular Lifbrary, cover illustration by the incomparable Rudolph Belarski. Mild edge/corner wear, thin vertical reading crease to left edge of front cover, thin crosscrack, crease to top left corner of back cover, lightly tanned pages. A fairly nice copy, internally tight and clean.