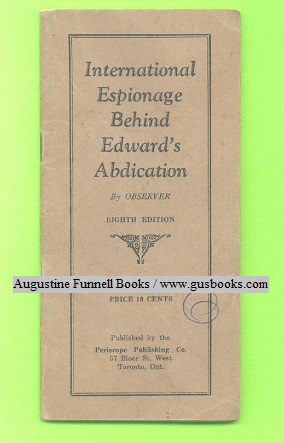 No date (circa 1937). A bit of paranoia mixed with a bit of Biblical numerology mixed with a bit of religious certainty mixed with some actual facts gives us this little piece about the British Commonwealth having "passed through a crisis that is not only extraordinary in nature, but unprecedented in severity." 36 pages (including a one-page advertisement for another title by the mysterious Observer, which the publisher claims will give the reader "a much better understanding of the causes which led up to the Abdication"). Scuffing to covers, edgewear, small ink scribble to bottom left edge of front cover, staining (looks like someone spilled a coffee on the thing) to bottom half of the last 10 pages or so, general wear. A serviceable copy, not pristine, but not falling apart, either.