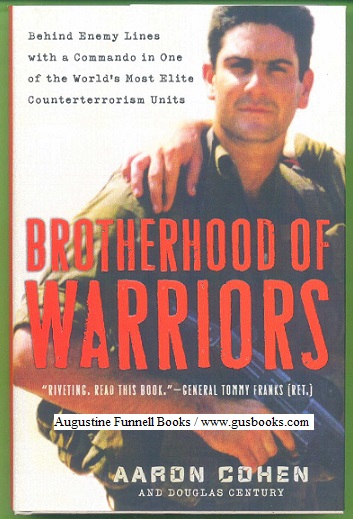 By: Cohen, Aaron, with Douglas Century

An 18-year-old from Beverly Hills, California, "determined to be a part of Israel's most elite security cadre," leaves America for Israel, where, "after fifteen months of grueling training designed to break down each individual man and to rebuild him as a warrior, [he] was offered the only post a non-Israeli can hold in the special forces." This is the story of how "In 1996 he joined a top-secret, highly controversial unit that dispatches operatives disguised as Arabs into the Palestinian-controlled West Bank to abduct terrorist leaders and bring them to Israel for interrogation and trial." Beige cloth w/silver foil spine lettering, 273 pages + acknowledgements, illustrated. Remainder stripe across bottom edge. An unread copy.