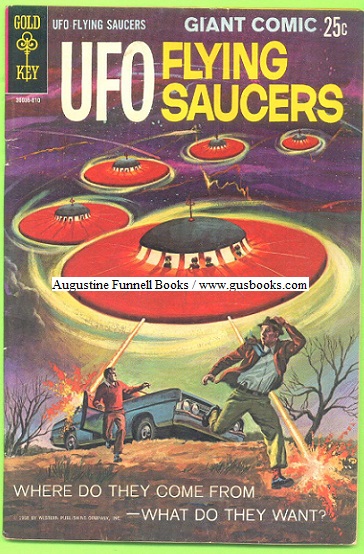 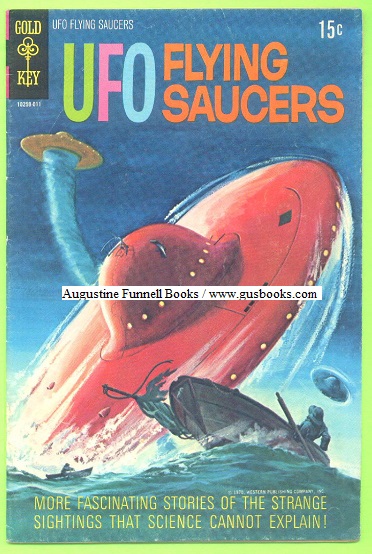 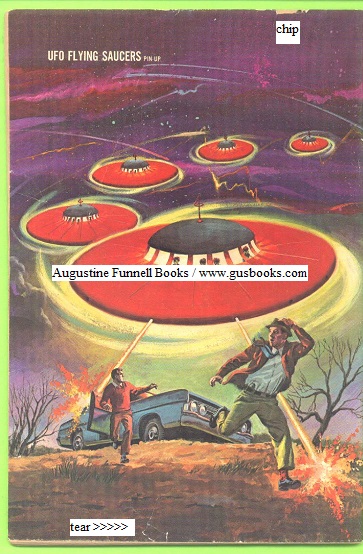 30035-810 and 10259-011, respectively. The first two titles in Gold Key's comic book series featuring weird stories concerning roughly eight bazillion reports of unidentifed flying saucers, the first issue published in 1968, the second in 1970. Both issues w/moderate handling wear/crinkles, light edgewear, w/a small rectangular chip to top edge of back cover of No. 1, and an uneven 1" tear to bottom edge of same. The grade of G-VG is given as a book grade, not a comics grade, since I don't have clue number one about comics grading. About the only thing I do know is that there are roughly 30,000 different grades, depending on whether one is looking at it in natural light, artificial light, had a drink earlier in the day, can spell "chrysanthemum" without consulting a dictionary, or has two siblings, one of whom thinks the grade of a specific comic is either VG-F or F- or F or maybe even F+, with the other arguing vehemently that it's either F- or F or F+ or maybe even F-VF. It's too nuts for the likes of me, so the damned things are G-VG, and that's the end of it. (And I didn't have to consult a dictionary to spell "chrysanthemum," either.)