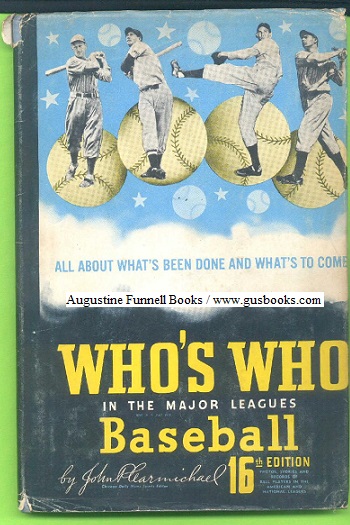 Who's Who in the Major Leagues Baseball, 16th

All the facts, figures and personalities from the 1947 Major League Baseball season, copiously illustrated, and chock full of such tid-bits as "The '48 Pirates have 15 new regular players from other major and minor league clubs acquired by barter or cash, along with a new manager. The new blood may restore a lot of red corpuscles -- and a lot of new aggressiveness." That optimism for a team that finished dead last in the eight-team National League, and 15th out of 16 teams in the entire league. Mind you, 1948 *did* see the Pirates climb to 4th in the National League, and 8th overall, but it would take another 12 years for Bill Mazeroski to break the hearts of Yankees fans with the first Game Seven walk-off homer in World Series history (60 years later, and I still get chills listening to the call -- I don't have a lot goin' on these days). Back cover photograph is a team picture of the 1947 World Series-winning Yankees -- a photograph of their opposition, the Brooklyn Dodgers, is relegated to the inside of the rear panel. Blue cloth w/gilt lettering to front cover/spine, 104 pages. Bumped/moderately worn corners/spine ends, tanning, glue stains on endpapers/pastedowns, in rubbed dust jacket w/chipping/tears to corners/spine ends, impressions/handling wear. Jacket will be put in a mylar sleeve, which will improve its spiffiness immeasurably.

Title: Who's Who in the Major Leagues Baseball, 16th

Who's Who in the Major Leagues Baseball, 16th