A Killer in Whiskey Smith

The third of the author's titles set in Whiskey Smith, "the jumping off spot for the real Wild West of the frontier days." A man who was judged to be defending himself when he killed three men on a Fort Smith street is heading back to the same town, looking for his brother's killers. Only mild wear. A nice copy. View more info 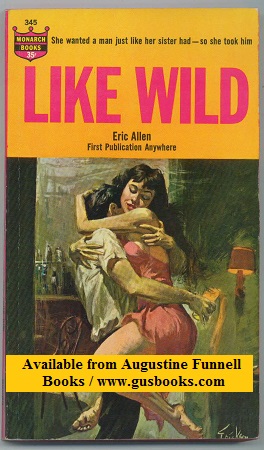 A man returning to Florida after a stint fighting guerrillas in Laos is faced with a corrupt fellow who wishes to steal his land, the corrupt fellow's woman (who wishes to teach him a thing or two about "how to stake out a claim on a man no matter what his previous commitments"), and his fiancee's kid sister, who wants him, and doesn't particularly care that he's her sister's betrothed (the poor sonuvabitch shoulda stayed in Laos -- he'd have fewer complications with the guerrillas). 141 pages + 3 pages of advertisements for other books published by Monarch, cover illustration by Geor... View more info